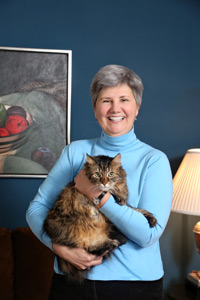 Here you will find helpful tips from Dr. Ryder for your dog or cat.

Purina vet, Dr. Zara Boland, wrote an article reminding us to be cautious with holiday decorations, foods, and other seasonal items.

I offer a summary blow and wish you and your four-legged family members a safe and happy holiday.

Happy holidays to all from the staff at Companion Animal House Calls!

National Pet Suffocation Awareness Week is from 11/25-12/1/18. So, this topic is not only timely, but very important.

Your pet can be endangered by an item everyone has in their homes: a potato chip, cereal, treat, or trash bag. This common household hazard should be properly stored or discarded. Most people are not even aware of this harm until after having a horrific loss experience.

It’s a fact: ninety percent of those who lost a pet did not know about this danger until it happened to them. Tell your family, neighbors, and friends about this serious threat. Please!

Statistics reveal that three to five pet suffocations are reported weekly and forty-two percent of them occur while the pet owner is in the next room. It only takes about three minutes for a pet’s oxygen level to drop to fatal levels.

The story of Petey, a Pitti pup who died from suffocation, was recently on the Today Show, and while the program increased awareness, it’s important to continue to alert pet owners about this matter of utmost importance.

To avoid the heartbreak, devastation, and guilt from this type of loss, be and stay aware. Tell others who own pets and ask each of them to tell at least two more people. You may save many lives and the pain of mourning a loved one.

It’s getting close to that time of year when trick-or-treaters appear at your door with bags to be filled with holiday treats.  While many people enjoy Halloween, most pets do not.  Pets can become alarmed by frightening costumes, and can get in danger if they get into candies, or scary situations.  Purina experts and vets, Dr. Marty Becker and Dr. Ragen Mc Gowan, have provided a few suggestions on the Purina Pet Care website for keeping your pets happy during this holiday.  They are worth noting!

Given the recent torrential downpours cause by Hurricane Florence and the recent tornadoes in the metro Richmond area, it is necessary to be extremely cautious about letting your pets drink water that is outdoors.  Standing water is a perfect home for bacteria, and one in particular that is always present is “lepto.”
Lepto is transmitted most commonly through rodent urine, so it can appear most anywhere outdoors--not just in water.  Common signs of contamination in pets include vomiting, diarrhea, and other flu-like symptoms.
Pets tend to dramatically increase their water in-take, and thus urinate more frequently.  This is a sign that kidneys may be compromised.  Pets may become jaundiced if the liver has been affected.  A common sign of jaundice is yellowing of the eyes and skin.
What should you do?  Prevention is a favored option. While not a common vaccination, it is available.  The good news is the disease is treatable if it is caught in its early stages.  Otherwise, it can become deadly.
Consult your veterinarian if you have any concerns--as always.  This condition is most prevalent in autumn.
Source: www.channel3000.com

It’s the time of year that folks are using fertilizers to enhance their gardens. Many of them contain fillers such as corn cobs, and bone and fish meal. Dogs and other pets may be tempted to tear open these bags and then eat the contents. This can be quite dangerous. GI upset is the most common symptom, but others can occur as well such as muscle stiffness or soreness.

If the quantity is too large, food boat or GDV are both concerns. Also, if the product is moldy and tremorgenic mycotoxins exist, your pet may experience tremors and seizures.

As you can see, it’s important that you keep fertilizers in sealed containers away from access to your four-legged family members. In addition, make sure preparations in flower beds and landscaping are dry before you let them out to play. Two hours is the general recommendation to allow complete drying and thus greater safety for your pets.

It’s Getting Hot Out There!

As the Summer temperatures are starting to rise, it’s important to be sure your pets have unlimited access to water, and shade. Since parasites, such as ticks, fleas, and heartworms are more prevalent in this season, be sure to consult your veterinarian to obtain proper preventative products.

NEVER leave your pet in the car! Cars can overheat very, very quickly--even when parked in the shade, or with the windows down or sunroof cracked. In hot weather, putting your pet in this environment can be deadly.

Avoid walking pets on hot surfaces such as asphalt and concrete. Paws can be easily burned.

Place gardening insecticides and fertilizers out of your pets’ reach. Their curiosity may tempt them to consume these potentially poisonous mixtures.

Don’t use cocoa bean mulch. It has the same toxin found in chocolate which is a big no-no for your pets.

Take your pets out for walks during the coolest hours of the day. Give them ample time to rest before and after outdoor excursions.

Enjoy the sunshine with your animals, but remain conscientious about decisions you make that affect your four-legged family members in hot weather.

“Whisker fatigue” is a relatively new theory which states that cats can become stressed from eating and drinking out of deep food bowls because their whiskers are sensitive and are in constant contact with the sides of the bowl. This is according to Lisa Polazzi, an ER vet. This scenario may cause the cat to avoid the food bowl, and the owner might be tempted to assume the cat is just being a finicky eater.

Of course other problems may exist that cause your cat not to eat or drink from his food bowl such as having dental disease or some other health issues. In such cases, your vet should be consulted immediately.

What are some common signs of whisker fatigue? You cat may paw or pull food out of the bowl to eat it on the floor. Or, she may make a mess around the bowl while eating. In addition, she may leave food in her bowl, but still seem to be hungry. Or, she may approach the food bowl with unreasonable caution. Finally, she may act as though she wants to eat, but just paces around nervously. All of these can be signs of whisker fatigue.

A cat’s whickers not only help with eating, but they also help them navigate in the dark. Whiskers have a special sensory organ on them which sends messages to the brain and nervous system. They are so very sensitive that they can even detect differences in the wind which can help them chase prey.

A special organ on each whisker is a proprioceptor which is a tactile sensor. Because these whiskers have a special sensor on them, they should never be trimmed.

Should you be concerned about your cat having whisker fatigue, it is best to contact your vet for an analysis.

What’s with all the licking?

Our canine family members are predisposed to licking because it is one of their natural instincts. Licking is typically first experienced when pups are groomed by their mothers in their earliest days. It can therefore be associated with comfort and feeling soothed.

There are several other legitimate reasons for licking as well including: as a sensory tool (licking and tasting to dogs is like reaching out and touching to humans); to get attention; as a form of greeting; due to a behavioral disorder such as O-CD (Obsessive-Compulsive Disorder); or as a sign of affection.

If licking becomes too much of a preoccupation with your dog, you may need the assistance of a certified trained or a veterinary behaviorist.

If you have concerns, consult your dog’s vet first. Your vet may be able to help you get your pet to abandon this activity--especially during early stages of life as a puppy.

Chocolate and flowers are considered lovely Valentine’s Day traditions for us humans, but they can be toxic to our pets.

The following list was compiled by the ASPCA Animal Poison Control Center of common poisonous products often shared on this special day:

Carbon monoxide poisoning causes 15,000 emergency department visits for people every year in the US. We don’t know the number of pets who are exposed to and affected by this toxin, but more than a third of the country’s households have either a dog or cat. So, it’s best to be aware of this toxin’s risks of exposure.

Pets that are low to the ground have the greatest risk of exposure as the toxin is about the same density as room air. Taller pets are therefore safer--but they are hardly safe. Birds are at an even higher risk of exposure and harm due to their unique respiratory system.

Carbon monoxide bonds to the oxygen-carrying part of a red blood cell so that it no longer can carry the oxygen. Organs such as the heart and brain are most affected since they use the most oxygen to function properly.

Any pet who is recovering from carbon monoxide poisoning should be closely monitored for three to six days. Watch out for a return or sudden worsening of neurologic symptoms.

Treatment typically involves delivering oxygen to the pet via intubation or in an oxygen chamber. Seizures should be treated with the appropriate medication. Blood work may be indicated to effectively monitor electrolytes and blood pH.

Carbon monoxide monitors can be purchased at places such as Amazon for approximately thirty-five dollars each. They are a worthwhile consideration in addition to always paying close attention to your pet’s daily routines and behaviors.

2017 Christmas Toxins for Dogs and Cats

Veterinary services
for Dogs and Cats

Our mobile vet clinic strives to continually exceed your expectations. We hope that you will recommend our services to your family and friends.

As an expression of our gratitude for successful referrals, we offer you a $10 discount certificate on your next house call visit. Please present the certificate at the time the services are rendered.

As always, we appreciate your choice to work with us for the life-long care of your animal companions.

What areas do we serve?

House calls are available
in the following RVA areas: